Friday Favorites: So Proud of My Girl

So my most favorite thing this week was Shelby's award ceremony last night. She originally wanted to blow it off, so I am so glad that she went because it was kind of a big deal.

I was a little taken back when I received the post card from school because it only said that she was being awarded for an accomplishment, but did not give us any indication of what that accomplishment was or how big this event was going to be.


Matt had to work, so I took the girls alone. When we saw parents with flowers and signs we knew this was a much bigger deal then we had originally thought. I quickly sent JagDad and MommaB a text letting them know this was a big deal and ask if they were available to rush up to the awards locations. They were able to make it long before Shelby walked the stage (she had about 200 kids in front of her.

Can I just say (without sounding like a bad mother) that this was a beating? 400+ plus children to get through and thank goodness I had some help with the littles because they were done before the ceremony even started. And the place echoed. And Morgan is not into being quiet - neither is Bekah.

I think you can hear it better in JAGdad's taping, but if you listen closely you can hear Bekah ask about Shelby's name. I think she was slightly questioning why Shelby doesn't have the same last name as her. I know the conversations are coming especially since she is starting to question who the man is that I leave Shelby with every few months.

Anyway, I am so proud of my Shelby-girl! 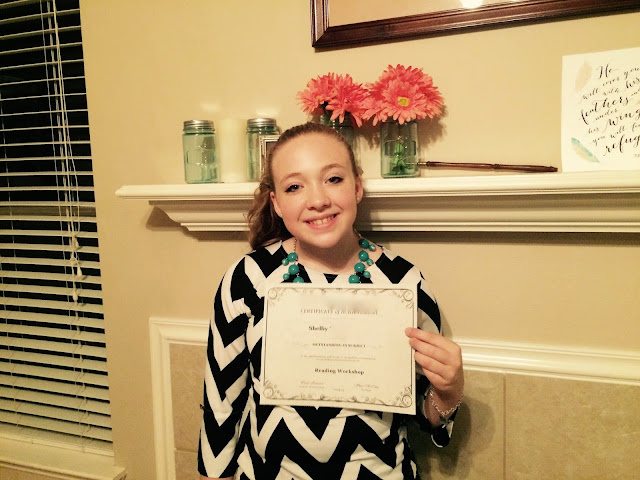