Meet Me at the Fair!

That has to be my favorite Judy Garland movie/musical and I sang that song in my head (and out-loud) pretty much the entire drive to St. Louis...we actually went to St.Charles first, but who is keeping track.

Anyway, we said our good byes to GrandmaB and then hit the road for a much shorter road trip to JAG's AuntG's house in St. Charles, Missouri.

Ok, let me take a small break and tell you that I do intend to keep the cryptic names in the blog...not that JAG"s family is the witness protection program, but because I like it...it goes with my whole JAG thing. Is but because correct English? I am sure someone will tell me. So in this post you will meet AuntG, UncleD and their sons B & M. You will also meet AuntD, UncleB and N...I am so lucky that there aren't any duplication. Oh you will also meet GrandpaD! Now that we have that all squared away back to my story.

We got in Monday night and had a great dinner while we caught up with GrandpaD.
GrandpaD was very excited to meet Bekah who we named after his late wife (Bekah's middle name Genevieve which was JAG's grandmother's name). He quickly sat down to hold her saying he didn't expect her to be that chunky - she is pretty solid at 23 pounds.

The weather was so nice (it rained during our drive in) that we spent most of the evening in the front yard playing croquet. Well, I didn't play since I've been know to be a major croquet cheater in the past...I just can't play without kicking my ball a bit in the direction it truly needs to go...I should call it persuasion not cheating. 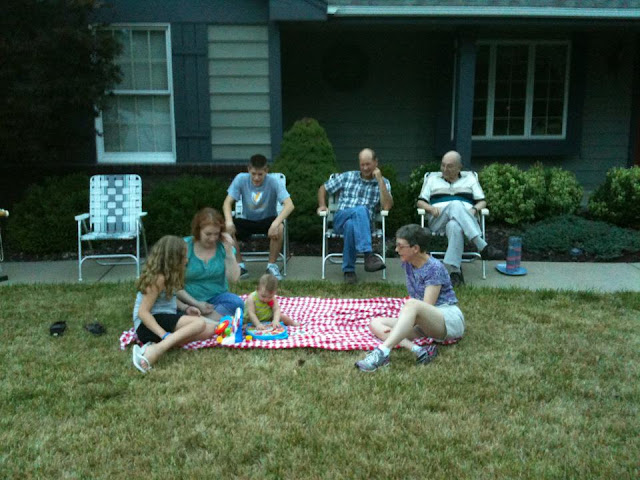 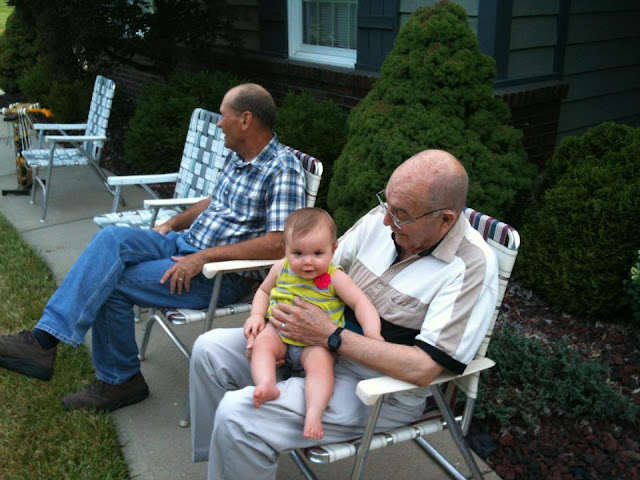 The next morning after sleeping in AuntG's basement (which Shelby and I loved) when got up and went to the St. Louis Zoo. 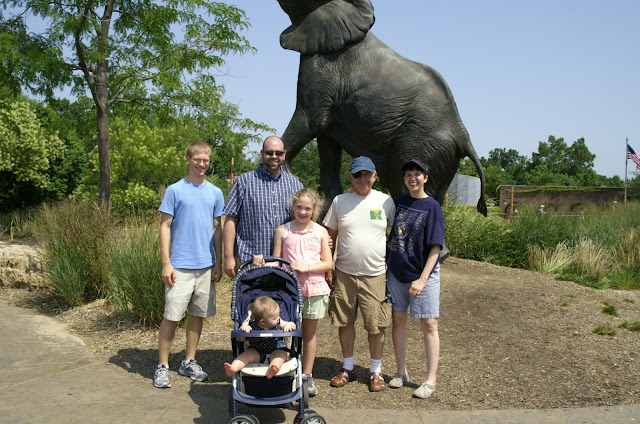 B, AuntD, UncleB and N came along to enjoy Bekah's first zoo visit with us. We so enjoyed having them along even though it was so hot. 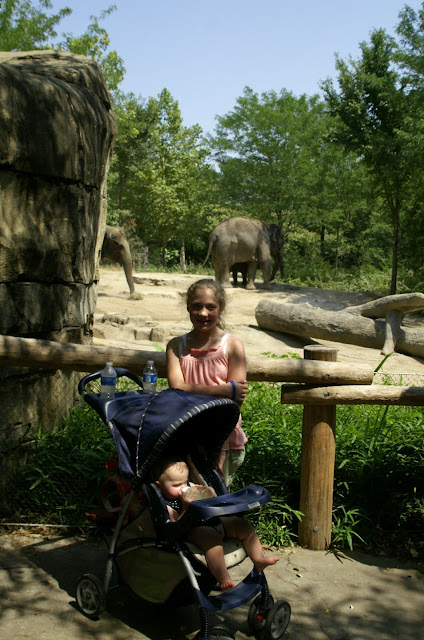 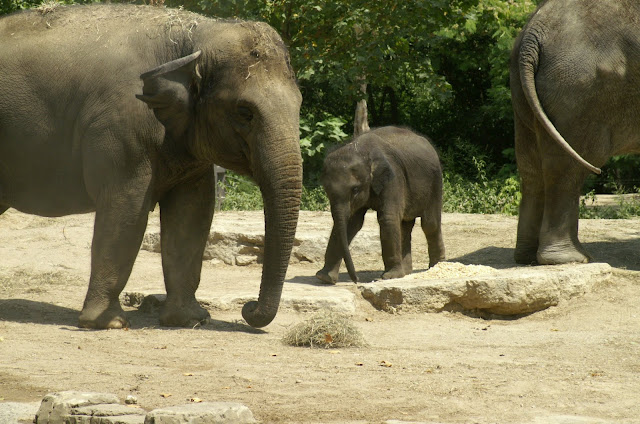 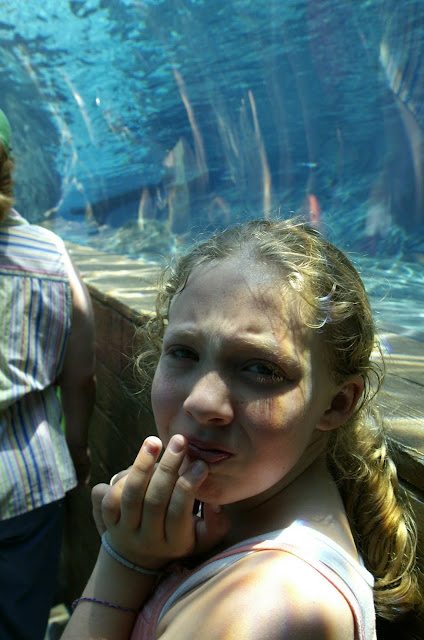 It was so hot and a bit crowded that we made it to the Elephants and the Sea Lions then had lunch and left. The Sea Lion exhibit is new - you walk through a tunnel under them - Shelby loved it I promise - I think she was just hot. 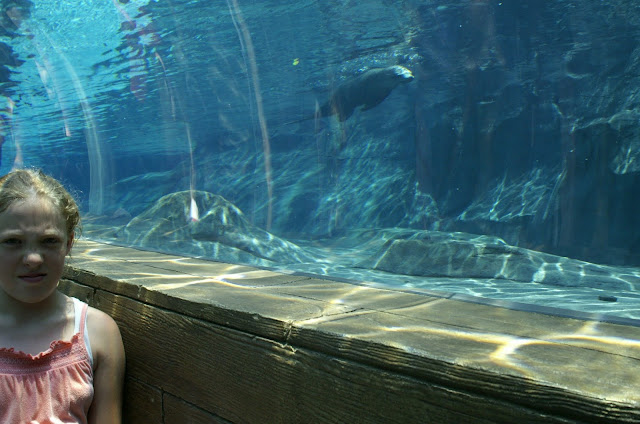 We had a break from the heat during our car ride to the St. Louis Arch which I am told is a must see attraction...it kind of made me anxious, but doesn't everything? 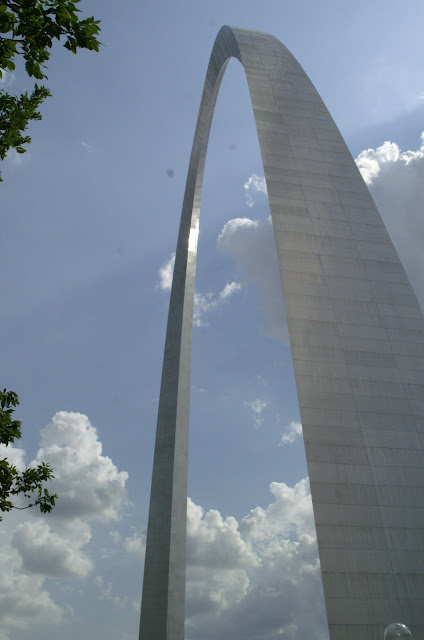 We went through airport style security to get under the arch. They have a museum (sorry no pictures) and shops underneath. We hit the mercantile where I picked up a Little House on the Prairie cookbook and Shelby debating on a bonnet.
Then it was our turn to go up to the top. We were led into a holding area which pretty much a small museum too. 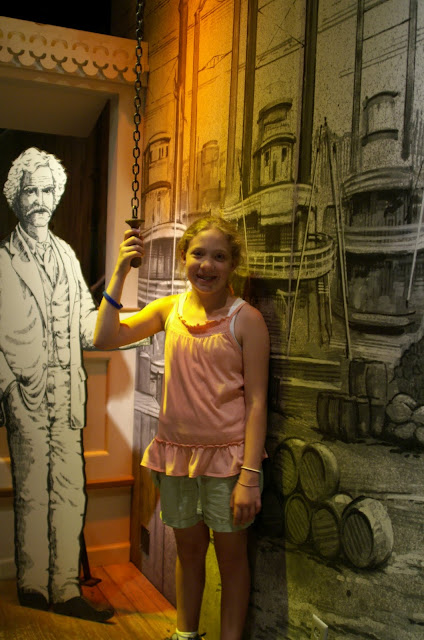 Bekah slept through most of the waiting around. 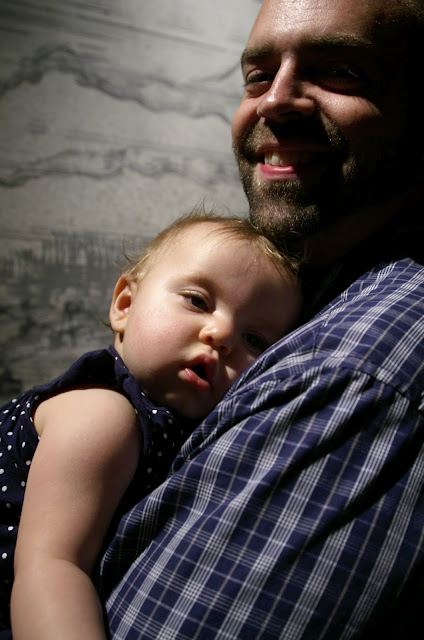 Our next step was to get in these little pods that were only four feet tall and sat five people...my anxiety rose at this point. I was praying as a shoved my two babies, my over six foot husband and his cousin who stands at least six foot as well into this Mork and Mindy looking  room to be elevated up in the huge metal arch. 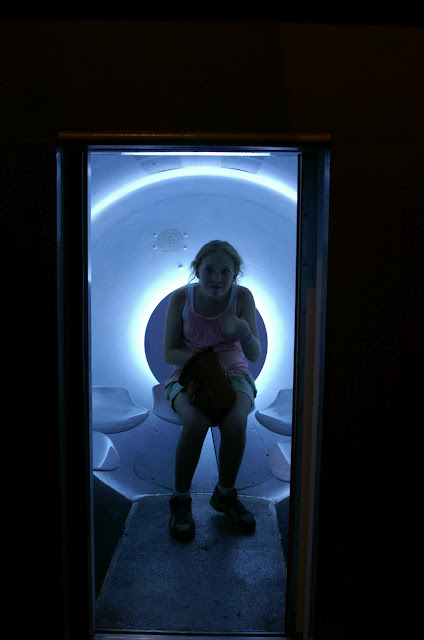 In the crazy little pod is where this priceless, I will keep forever picture was taken. 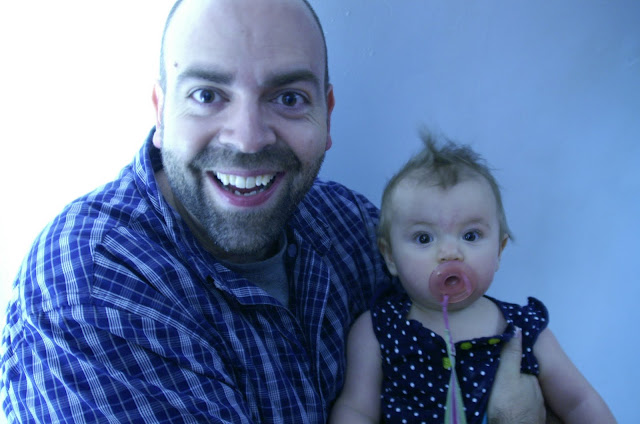 Baby girl was wide awake and needed to be changed. Yeap, we laid her out across our laps and changed her diaper during our four minute ride to the top.

Once we got to the top and squeezed our way out of the pod I realized I have completely different daughters. I have one just like me who is scared of just about everything this includes heights and one that is fearless. Bekah is my fearless girl. She climbed right out on the observation window and started pounding her little first and squealing! She loved seeing everything below. 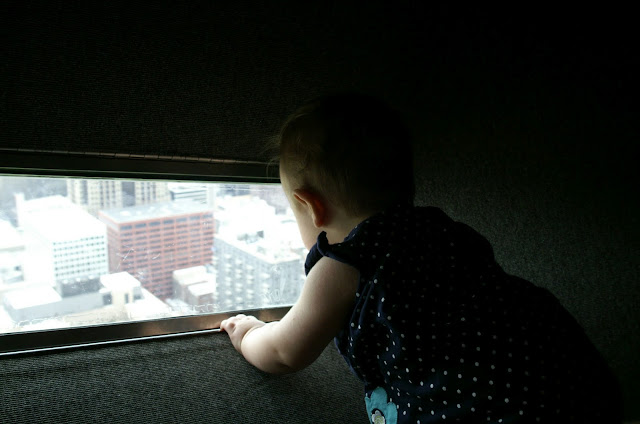 And there was alot to see like the St. Louis Cardinals stadium. 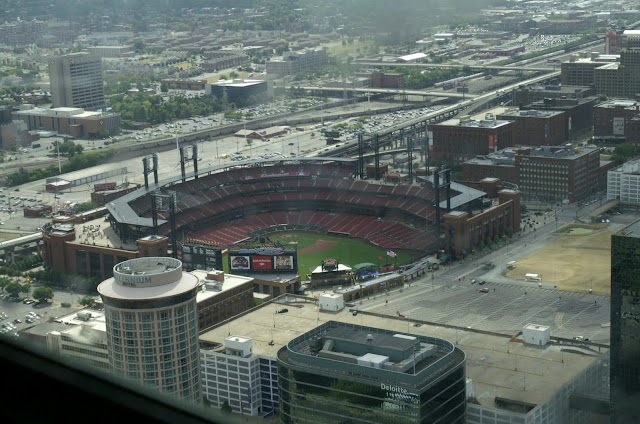 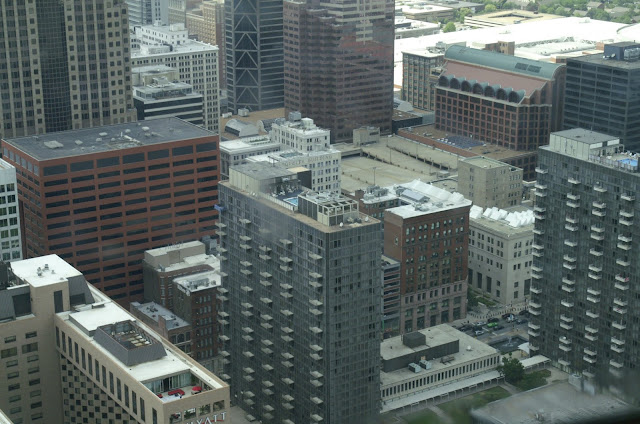 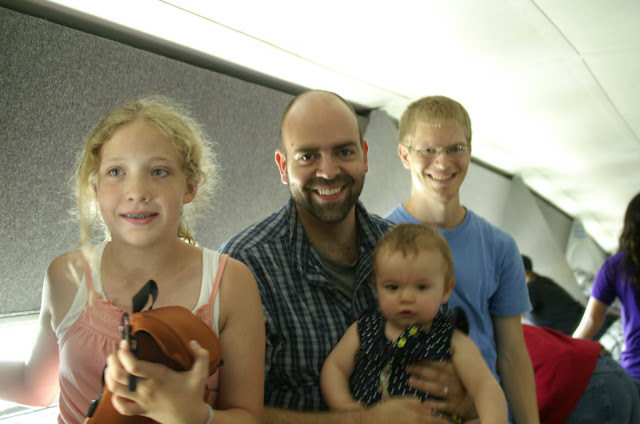 We stayed long enough for a few pictures then it was back to the pod. We were joined by a fifth rider so we decided that everyone should keep their clothes on.

I am glad we went and it's a good memory, but I'm not sure if I need to go again. I think I will stay in the gift shops and museum next time while JAG takes the kids up. 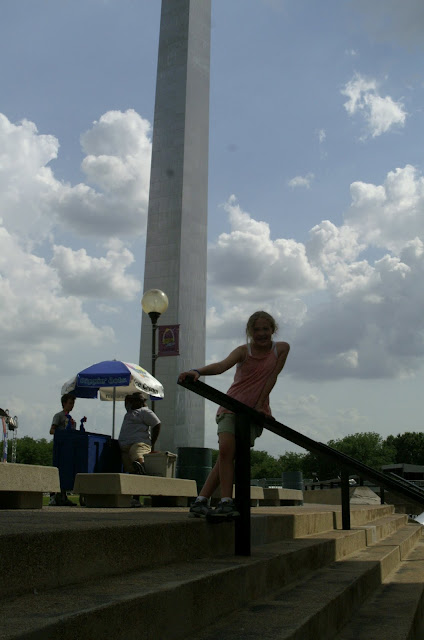 I had been planning on celebrating Shelby's Spiritual (Baptism) Birthday this year, but I really wasn't sure what we were going to do. I was lucky to have AuntG there to save the day. She planned to celebrate her son M's Baptism Birthday while we were there since JAG is his godfather. AuntG was sweet enough to include Shelby in the celebration. 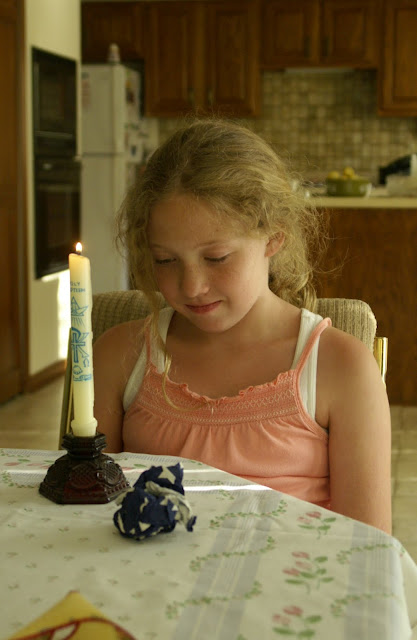 They also included me since I was also Baptized on July fourth - eleven years before Shelby. I have to find some baptism candles so we can continue this tradition! 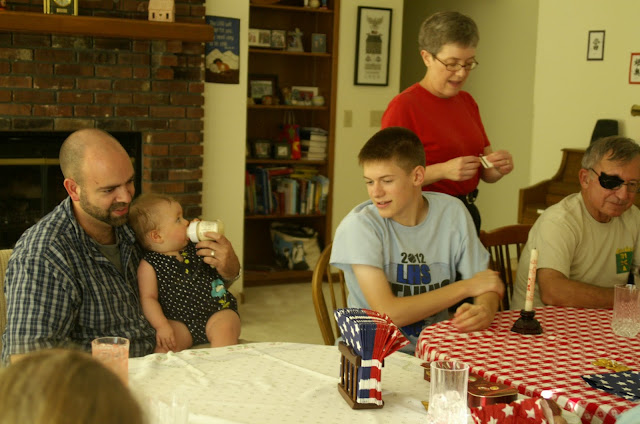 The next say was the Fourth of July and yes I bought my family all Old Navy t-shirts...pretty cheesy huh? 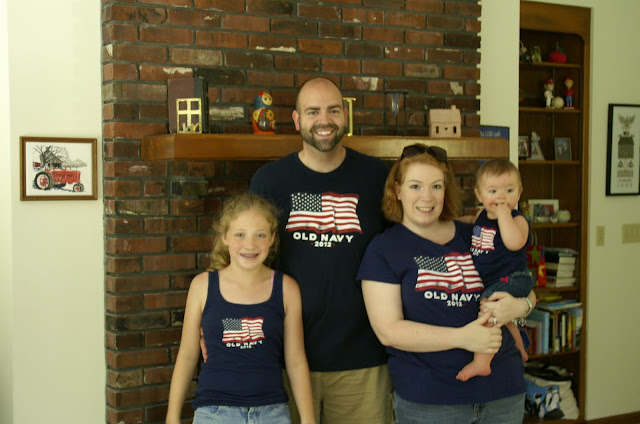 We spent the morning getting a tour of St. Charles from AuntD and GrandpaD. Again, I fell in love with all the old homes in the area.
We said our goodbyes and headed to St. Louis to see JAG's Godparents. I was in awe, his Godparents live on the campus of Concordia Seminary. I have heard so much about JAG's Uncle Jeff and Aunt Renee (I know...I'm not be cyrptic) through the years, but haven't had a chance to meet them in person. 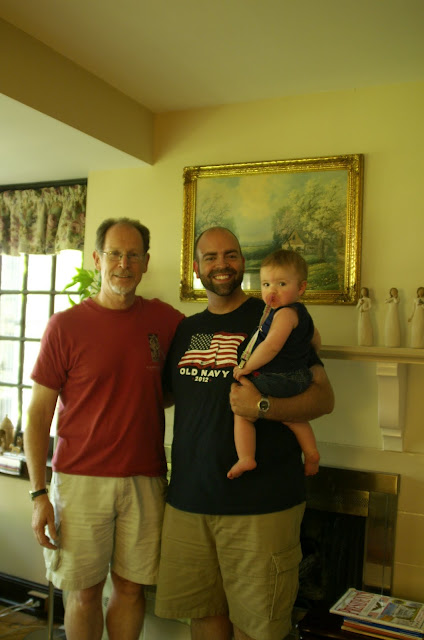 They were just as I heard they would be: welcoming and so delightfully loving. Aunt Renee didn't bat an eye when Shelby as for a tour of their 1920s built home including basement and attic - yes we can be nosy sometimes. 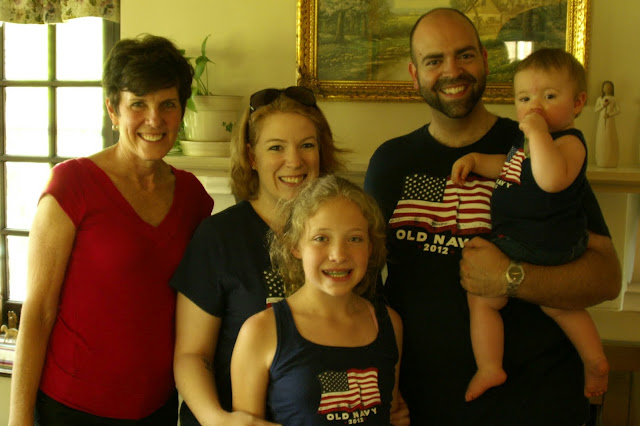 We had a wonderful afternoon full of conversations and laughs. I really do hope to see them more often - I have plans to pull from all the knowledge in the future.

So from there it was back in the van for a four hour drive to Branson. We were so exhausted when we got back that we didn't make it out to see fireworks. JAGdad did drive Shelby to Walmart and they stopped along the way to see some...he spoils his granddaughters a bit.

Tomorrow I think I am going to tell you about these guys and their brothers...Shelby's new favorite people. 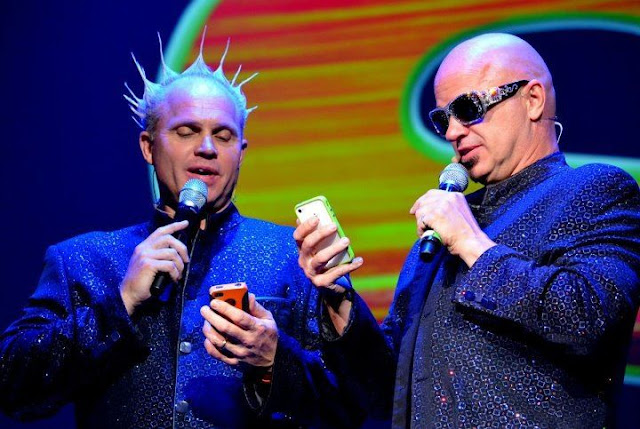