The Story Behind Come On

Today, I wear a delicate gold chain around my neck. From the chain hangs a small dog tag style pendant that says, “Come On!”.

Now, in normal everyday language you usually hear these two words with things like “let’s go”, “you’ve got to be kidding me?” or a simple “already!”. This combination of words is usually a signal of discontent of some sort.

Unfortunately, this story starts with a tragedy. Shortly after the birth of my middle child, Bekah, I attended a funeral for my childhood friend, Tiffany.  A tragic car accident the week before took Tiffany’s life. She left behind four young children and a husband. I had not seen Tiffany in well over 20 years, but when you lose someone you have had countless memories with you do your best to pay your last respects at their funeral (or at least I do). I was relieved to find out that my friends, Lacy and Gloria, also wanted to make the almost two hour trek that would lead us to a tiny, tiny far North East Texas town.

I do not recall why we were running behind, but we rushed into a crowded funeral home, signed the guest book with our maiden names, and walked into a  chapel was becoming standing room only (which is normal when a young person dies) (yes, 34 is young). Me being me (with no fear of funerals and the dead) was over joyed when an usher escorted us to actual seats. We received odd “who are these women?” looks as we were escorted past all the other mourners to  the second row across the aisle from Tiffany’s family. It was due to that or the way we filed in  - Red Head, Hispanic Girl, Red Head - each dress completely in black.

I sat next to a young man I can only describe as a good ole’ boy (no disrespect intended). I shared pleasant smiles with him before glancing in front of me to see Tiffany laying peacefully in a dark casket. She was still very petite with dark hair. Memories of her flooded my mind - sleepovers, birthday parties and school dances. Sadness then took over as her family was seated across the aisle.

Kleenexes were passed between our seats as a myriad of people stood at a podium in the corner  of the room telling stories of Tiffany’s short life. After some good old Southern Baptist hymns, the pastor took his place at the podium. This is when the funeral turned from sadness to extremely humorous, at least to me and my dear friends who sat to the right of me.

The pastor spoke just a you would expect from any small town Baptist pastor. He gripped the podium strongly as his voice raised for each point he wanted to drive home. A brunette cowboy who sat on the front row directly in front of us was feeling the message more than anyone else in the chapel on that cold February morning.

Lacy, Gloria and I were all a bit startled the first time he grunted out, “Come On!” in response to something the pastor said. To say this pallbearer was filled with the Holly Spirit would be an understatement, with every inflection of the Pastor’s statement the cowboy would get more worked up. His “Come On”s were filled with more and more passion until he could barely keep his seat. It appeared he was watching a tense college football game instead of a funeral.

Now, don’t get me wrong, I am all about passion for the word and Jesus, but from what I recall we got the giggles right out the shoot though we coughed them out and tried hard to keep them held in. That’s the moment I realized sitting next to Gloria, the one person who can make me laugh till I pee my pants, wasn’t the smartest thing. I did everything humanly possible to keep my composure which included not looking at Gloria. She was feeling that same way as she kept her gaze directly focused on the front wall of the chapel. I believe Lacy was holding herself together better than we were - she’s good at that (sometimes).

The “Come On”s just kept flowing out of this passionate pallbearer. It became so painful to hold in the hysterical laughter I heard in my head, which, can I just say is a huge feat for me since I am great a laughing at inappropriate times. I normally can leave the room, but we were stuck, so I placed my head in my hands to breathe. This action led the good ole’ boy next to me to looking over  with sympathy almost appearing like he wanted to give me a big hug.

After what felt like a two hour sermon the pastor wrapped things up with a prayer and we left as quietly as possible dodging the family greeting line as we exited. When we made it safely to the privacy of my car we all took a deep breathe and burst into hysterical laughter. Kleenexes were passed around again as our laughter led to tears (we were laughing so hard we cried - you know the feeling). Other funeral goers got into their cars around us and I am quite sure they thought, “man, those poor girls are so torn up over this.” It was true that our hearts did grieve for our childhood friend, but as a wise woman, named Truvy, once said “Laughter through tears in my favorite emotion.”

That day “come on” turned from a phrase of discontent to a joyful shout of agreement. And a mother of a newborn, a woman going through a sad divorce and a woman coming to a crossroad in her life sealed a bond that started 24 years earlier. We needed that trip, that event and that cowboy.

After that day in February 2012, “Come On!” has become a fixture in our friendship language.

We need a girlfriend date with quiche.
Come On!

This (a random cartoon about exercise - or lack of) is so me!
Come On!

A couple of years later as I prepared for my move to Houston away from my best friends I received a precious gift from them (during a quiche date). 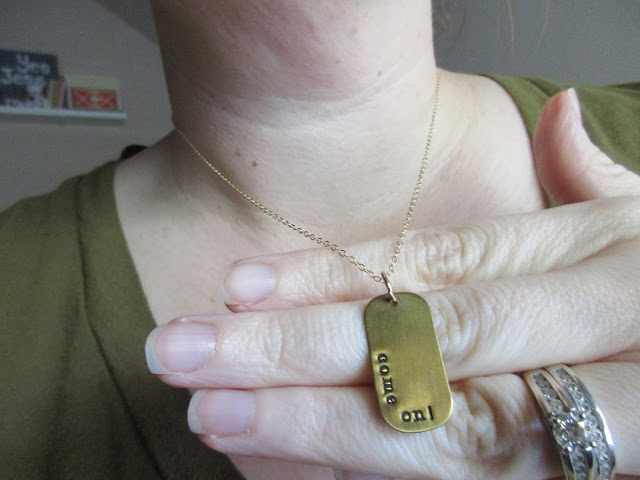 This pendant on a delicate gold chain that reads Come On!  It’s a reminder of that cold February morning, that cowboy, and a bond that will last a lifetime.
Posted by Dana Rae at 3:09 PM