Only a handful of people know about this day 15 years ago. It’s been so long and only lasted a short time, so it really isn’t something that comes up too often in conversation.

And to be honest saying “I’ve been married three times” is hard! I’ve sat silently through many conversation as people have said, “well she’s (or he’s) been married like three times, so there you go” like that number is an indication of how messed up the person is. I am quite sure that that reference has been made about me before as well.  I get it, I do. I understand the stigma of divorce no matter how many times it has happened, but without defending my actions (too much) let me tell you how I ended up divorced at the age of 22. 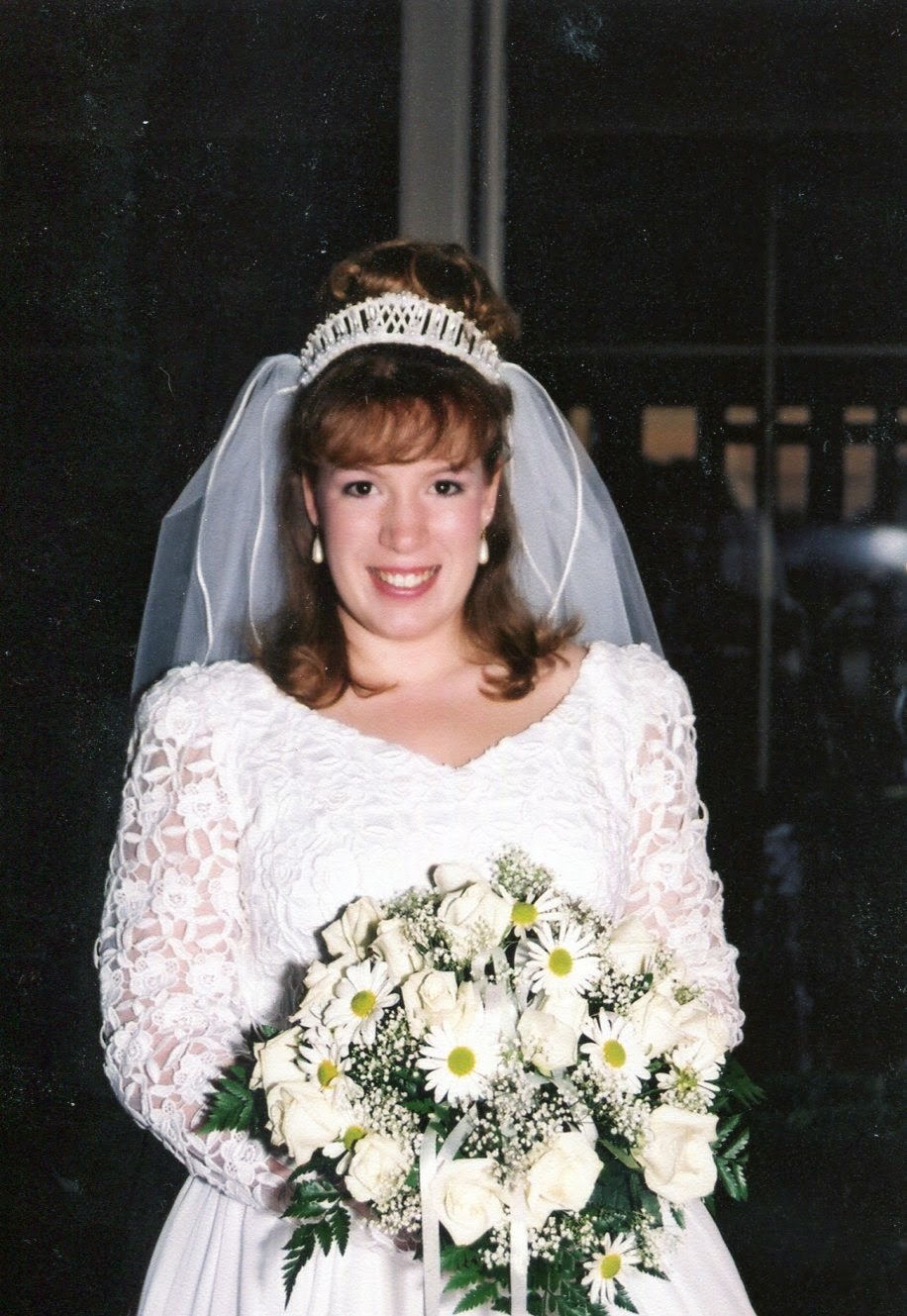 I met my first husband in high school. For the purposes of this blog we will call him Jay. We dated on and off  during my senior year. He took me to prom and even though we were not together at the time we did pose for a really good graduation picture together (I’m sure I have it somewhere). After graduation, we went our separate ways for a bit. A bit meaning a few months (maybe 6) and then we got back together.

We first got engaged when I was 20. I still remember at that time people questioning our relationship. Unlike, my second marriage (which I will get to eventually) the cracks in our relationship were very visible to people around us. Jay had a serious drinking problem at a young age which was some what hereditary in his case. And to be honest we really were from two different places and did not mesh. (I laugh because Matt and I are from two WAY different places as well, but there is a common core in our relationship)

I am not sure exactly when our first engagement ended, but I do know when our second one started. (that was probably a sign that I ignored) My friend was getting married and I took Jay to the wedding with me. It was the season in my life when just about all my friends were getting married. Looking back now I am not sure why everyone got married so young (like 21 or 22). I know at the time we felt old, but really we were so young…really young.

Urgh, I fell into the “wedding trap.” I didn’t really want a marriage, I just wanted a wedding. I wanted a big white dress and a party. He was there and I thought he would be a good fit, so Jay and I got engaged again. He should have know (I should have know) when I insisted on a new ring because I needed it to be closer to what my girl friends had and not the small ring I had before. Oh man, I really don’t like typing this - I was not a good person then.

So, we got engaged, had the portrait made (because you have to announce the engagement in the local paper, right) and started full scale wedding planning. Along with wedding planning I planned out how I would change Jay into the perfect husband.

I just knew that once we said “I do” something miraculous would happen and he would change him into the “perfect guy” for me.

We began marriage counseling at the church. Let me tell you at the time my life was not very faith centered, at all. Jay and I were living together and had no plans to change that. We attended the Presbyterian church because that is where we wanted to get married, but really I was so off my walk with God I can’t remember a single Sunday morning sermon. I was just punching my card so I could have the venue I wanted. Again, it’s not easy to type.

And even though I was off my path this was the first time that I heard the term “equally yoked” or in our case “unequally yoked”. I think even in my early 20s I had the “playing everything off as perfect” (which I will get into more later) down pat. I had people convinced that my faith was stronger than his and I was given all the information about how that would be a struggle in our relationship - this is mind boggling to me as I type this. I was told that, but the entire time I was the one manipulating the entire relationship.

During pre-martial counseling it came out that Jay’s drinking was a huge strain on our relationship. I have no plans with this blog to run Jay’s name (or fake name) through the gutter, but I want you to know a big sign that God gave me over and over again. I spent countless nights locked in my bathroom. Jay was never physically abusive - at all, but his drinking brought huge emotions. Emotions that I could not handle and the only way to escape them was to lock myself away for the night so he could sleep it off. Wouldn’t that kind of signal “this may not be the best relationship” for you? It did to me too, but I had to have that wedding so I kept pushing on.

The sad part about this is that Jay’s drinking increased because of the pressure I put on him to be different. He confessed at one point that my friends made him so self conscious that the only thing he could do was drink until he was comfortable. Unfortunately, comfortable was almost a twelve pack - a kid you not.

One Sunday I attended service alone and when the pastor asked how things were going I became unglued and broke down in tears at the back of the sanctuary. I confessed I was tired, I had sleep on the bath rug again and I just didn’t know what I was going to do. Her (yes a female pastor) solution was - do not get married. My thought then as a 22 year old was “What? How dare you!” My thought now at 37 is she was very wise and that was a good plan, but you can’t go back and change the past.

Pretty much she refused to marry us, but said we could still get married at the church, so I brought in our family Pastor who married my cousin, was with my grandfather when he passed away and would eventually be with us during my Meme’s funeral. Needless to say, I did not share a single peep about the drinking and our issues with him. To him we were a perfect couple, high school sweethearts in fact.

This is where I need to mention that my parents were not 100% on board with this marriage either, but I think they had a “keep the peace” mentality and never “forbid” me from getting married. The stressed caused my mother to have Bell’s Palsy (may want to google that) the week of my wedding. Unlike my parents, I kept my Meme completely in the dark - she believed all was perfect and gave her seal of approval.

So, April 8th rolled around. The white dress had been purchased and everything was perfect, except me. I remember after my attendants left the bridal room, I stood, staring in the mirror hoping someone would stop this. I wanted someone to say “this can’t happen.” I prayed for something to happen to postpone the wedding or that someone would object when that time came. I did not want to do this, but I was committed. And at the time I felt I couldn’t break Jay’s heart. You see, he was madly in love with me while my love was lukewarm. 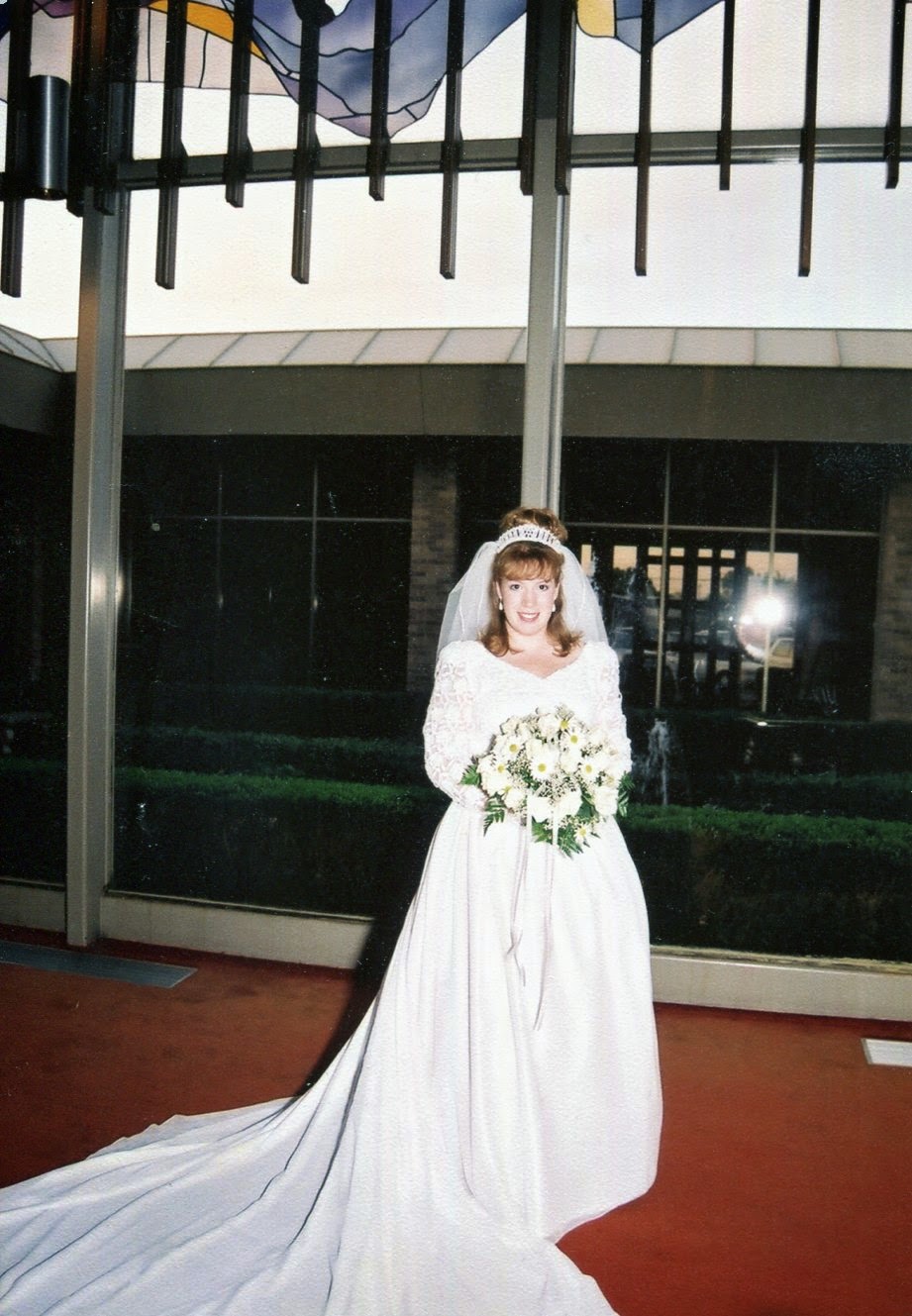 Oh man, I should not have walked down that aisle, but I pulled myself up by the boot straps (my mom’s favorite saying), put on a smile and said “I do”. I smiled for the camera and had cake the entire time thinking “I can do this. There is still a chance that he will be different.”

As I told Shelby this morning the things you don’t like about someone just get magnified with marriage - when you are bound to spend life with someone. You cannot go into something as serious as marriage thinking that you can change someone - that’s kind of a given, but at 22 I still thought it was possible.

Jay and I were separated four months later with a quick and easy divorce happening the following year.

I remember expressing my issues to a co-worker before I got married and her asking me “How do you think it will feel to check ‘divorced’ on a form?” I was so blind about what divorce does to you and at this time in my life it still didn’t do much to me, but it did a bunch to Jay.

Talk about some guilt I’ve carried -  what I did to him was the worst. He didn’t take things well and our splitting up made his condition worse. About six years ago he contacted me while completing his steps (12 steps) and needed to make amends. Sitting at Starbucks as adults we were able to admit that we both did not have the tools to sustain any kind of a successful relationship. We each held no ill will towards each other, but at the same time there was sadness. I am a strong believer that God knows my path and there are times he lets you go places to learn from - this is one of those areas.

I wish I could say (and I’ve even lied about it) that I haven’t been married three times, but it’s a fact. If you google me it shows up (not really an indicator of fact, but still). As I went through counseling at the end of this relationship I learned the term codependent.

Codependent relationships are a type of dysfunctional helping relationship where one person supports or enables another person's addiction, poor mental health, immaturity, irresponsibility, or under-achievement.

I had been codependent for years and even after this relationship I struggled with codependency. It’s something that first hit my as offensive, but it is a cycle that I am so glad I have broken.

So, what do I want you to take from this?

When something doesn’t feel right it’s probably not right.

Don’t mess with other people’s emotions to get something you want - it will never end well.

When everyone is telling you that you shouldn’t do something, then you may want to stop and listen.

A pastor is a wise counsel. They are almost always are coming from a good place (in line with God’s word), so you may want to take their advice seriously.

And in the end…be yourself, don’t try to keep up with everyone else. You are absolutely perfect just the way you are, on the path that God has for you.

And remember when you say, “well she’s been married three times, you know what that mean?” that you now know someone who has - do you think that about me? (Does that statement even make sense?)