Oh man, Can I start at the end? 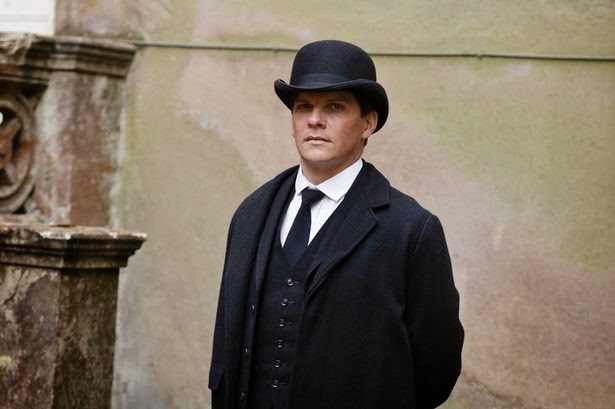 Out of the blue a policeman shows up to asked Carson “Did a man name Green stay here?” Then, he drops a bombshell that a witness has come forward and that they may open an investigation! Ms. Hughes became a shade just lighter then Casper the Friendly Ghost! Does she know that Mr. Bates killed Mr. Green? I saw in a commentary that Ms Hughes may be the killer and that is why she is freaked - I seriously doubt that happened. Oh Mr. Bates, your anger may have gotten the best for you this time. How dare those writers leave us in a cliff hanger!

Let’s see what else went down at the Abbey this week. Well, Barrow is still up to his tricks. He is sideways over Baxter going back on her agreement to keep him in the know while he kept her shady past under wraps. Oh, that shady past - she’s still hiding something. Even after Big Barf Barrow spills the bean to Mosely, Mosely has a hard time believing that there wasn’t an underlying reason why Baxter would steal. I do feel for her I’ve too been in the position of feeling like I’d cut off a limb if I had a chance to rewrite my past, but I strongly believe it’s time for her to get it out and heal! 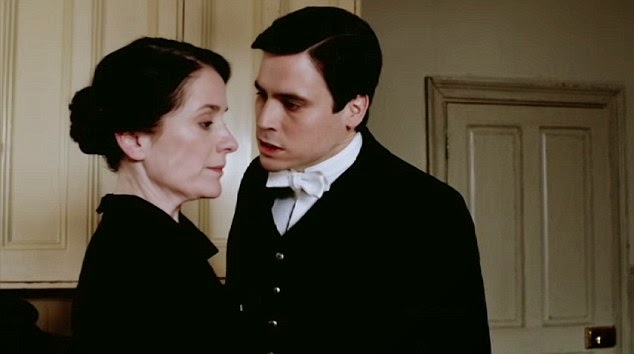 I think that Barrow is trying to suck Anna in with the whole “there are time I wish I belonged” melodramatic act he put on downstairs after listening to the wireless. Don’t fall for it Anna! 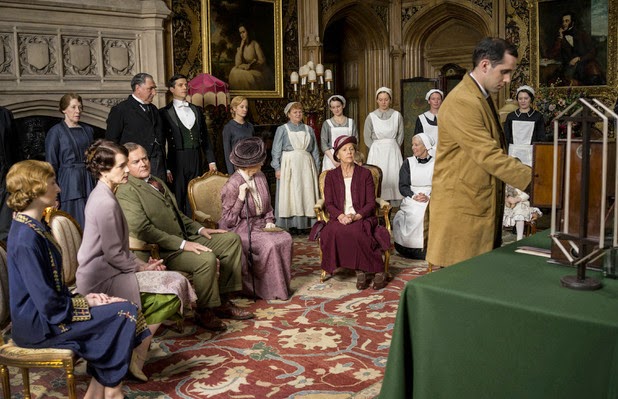 And that wireless with all of it’s wires. There was quite a debate on having a radio in the Abbey. Lady Rose dropped more hints then I do around Valentine’s day (did you see the new heart necklace Lisa Leonard has?). Lord Grantham finally gives in when he hears that the king will be speaking. Of course that would be Kind George V who was the father of King George VI (who was portrayed in the King’s Speech) and grandfather to Queen Elizabeth. Now, that you have that genealogy down let me say that the wireless is here to stay even though Carson seriously disagrees.

Speaking of disagreements, there is one person that Carson cannot stand to disagree with and that is Ms. Hughes. Am I sensing a love connection happening here? Wouldn’t that be just divine? At least it would be if she’s not Green’s killer - just saying.

Ms. Hughes always seems the keeper of the secrets. Now that I think about it both her and Anna would have some pretty interesting memoirs. Did you catch how they found a picture of Edith’s daughter, Marigold, under the pillow as they cleaned out the charred remains of Edith’s room? With a slight brow raise, Ms Hughes tucked it away with Edith’s other things. I wonder if anything will come of that? 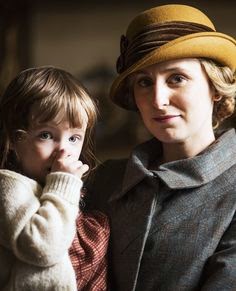 The Edith, Marigold, and the God Mother situation looks like it could be headed into rough waters. Mr. Drewe is all in and put on a pretty convincing act of asking Lady Edith to be Marigold’s God Mother, but wait, did he not remember that she already had one? Yep, Mrs. Drewe’s sister and Mrs. Drewe is non too pleased with Edith playing house with her youngest daughter. Really, this is just another situation where Edith needs to come clean, deal with the consequences and be with her daughter.

Lets just hope that Lady Mary doesn’t find herself in the same situation after this torrid trip with Gillingham! Do you really think they talked this much about sex in the 20s? I guess since she is confiding in Anna and not spreading it throughout the house this could be true. There is just something about this that makes my stomach hurt. It may have to do with poor Anna having to face the drug store (not really sure what it was called back then) to purchase what we believe is a sponge - do I really need to write that? I’m not really sure what it was that she bought, but I felt so bad for her, she was so nervous.

We are getting glimpses of Mary as she was in the first season now that she is over mourning Matthew. Ah, Matthew, I miss him. I wonder what their relationship would be like if PBS could have settle the contract issues. Which reminds me - have you see this cartoon? 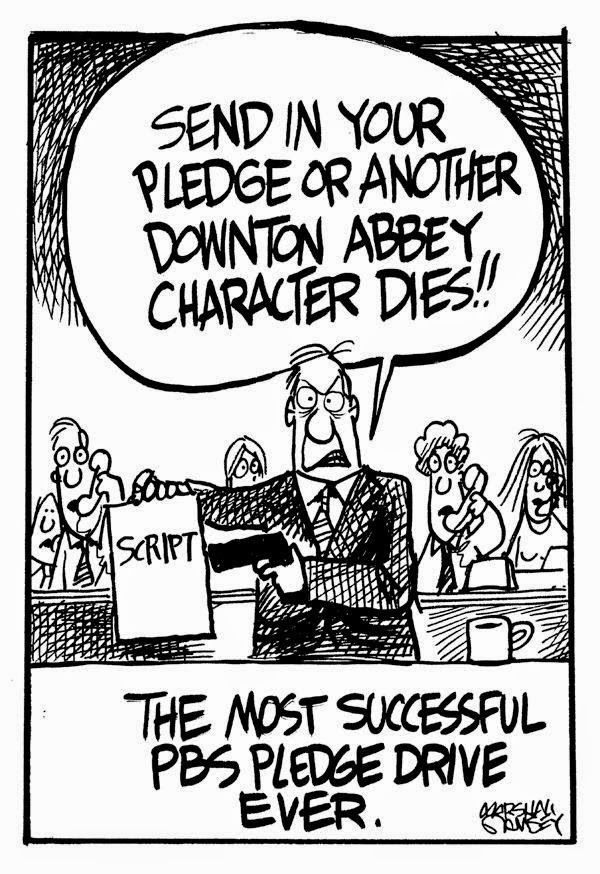 Anyway, did you notice how odd Mary seemed, how unsure she was when she arrived to the hotel where smooth move Gillingham arranged for them to have a-joining rooms? I wonder if Charles Blake’s arrival at Downton just before Mary left had anything to do with her if-y feelings. 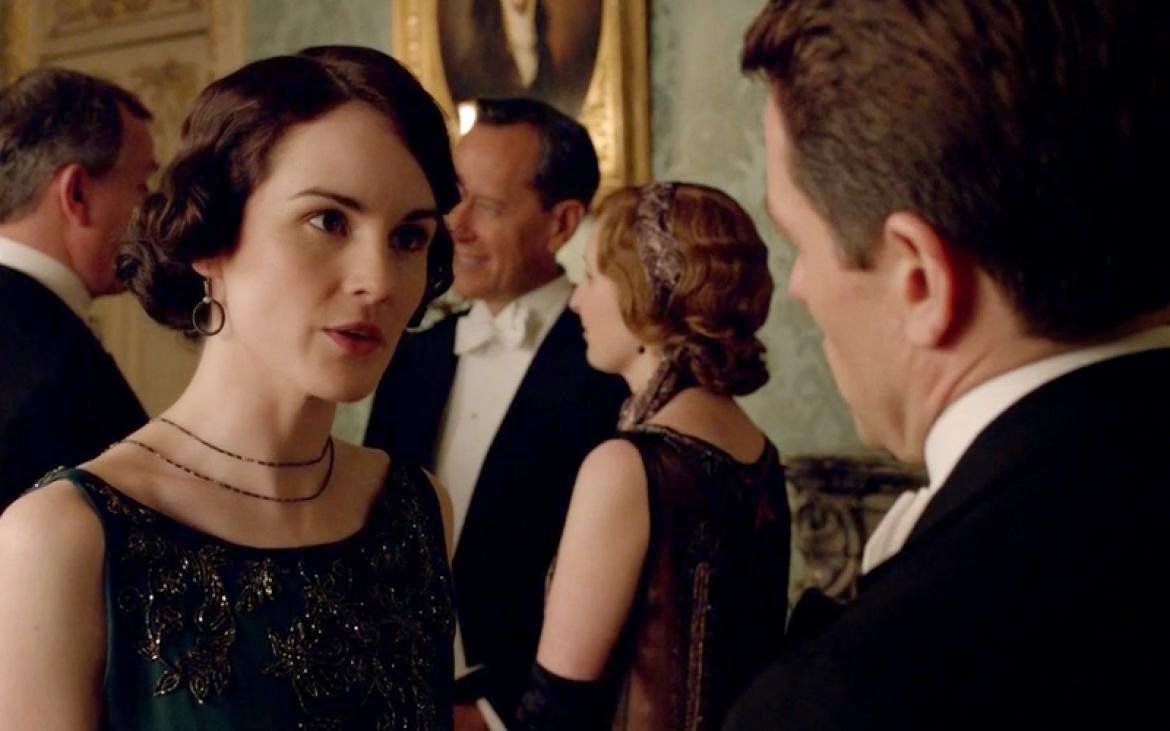 So, yep Charles Blake showed up a bit broken hearted that he was not the “lucky winner” of Mary’s heart which she kind of led on that she wasn’t yet 100% about Gillingham - this is before their get away of course. Blake accompanied Simon Bricker to Downton Abbey on what was supposed to be a quick visit to see a painting, but looks like could turn into a flirt fest with Lady Grantham. And trust me Lord Grantham caught on rather quickly and in an awarding winning passive aggressive move said that Mr Bricker needed to stop “trying to steal affection from someone else’s dog” - really? 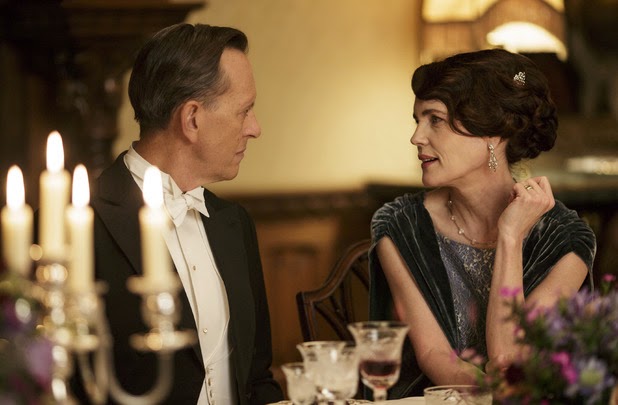 In other news, they finally found a place for the war memorial and they won’t lose this cricket field - thank goodness. Ms. Patmore hired Ms. Bunting to tutor Daisy which looks like the only way that Ms. Bunting is ever going to feel comfortable in Downton Abbey. Lord Grantham still believes that Tom is being led into his old ways by Ms. Bunting while Lady Mary thinks it would not be a bad thing for Tom to be true to himself again.  Also, Violet and Isobel are doing the same old thing, tea with gentlemen. Isobel is about over Violet’s back handed jokes, but for some reason still keeps her around. 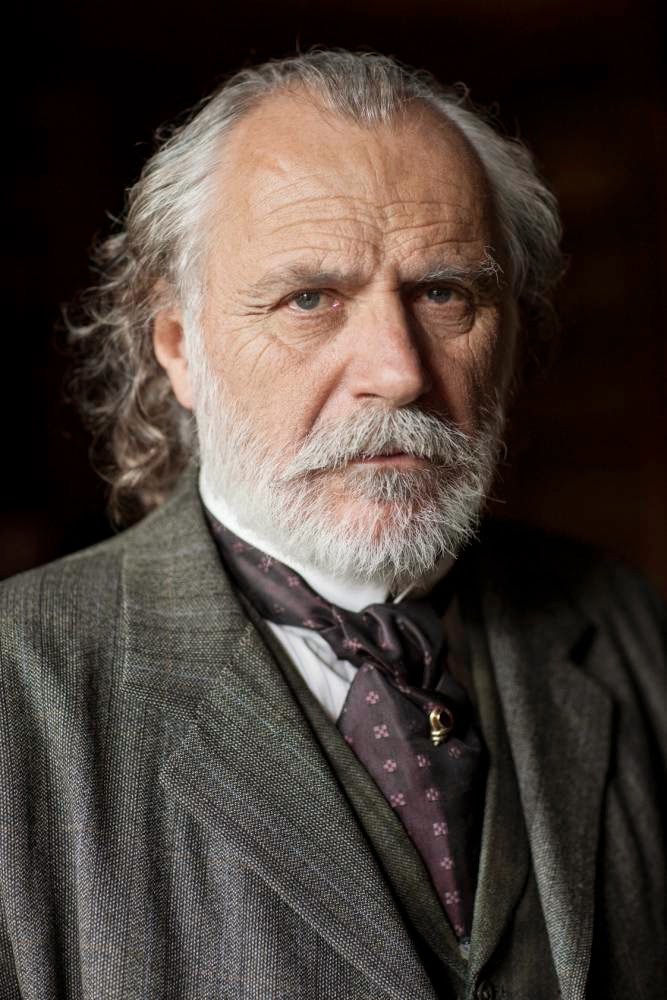 I can’t wait to get the details of Violet’s past next week and also learn if Tom is leaving for America!  Oh, and I am waiting for someone to die…we are two episodes in, shouldn’t there be a death by now?
Posted by Dana Rae at 9:38 AM