Proven Today - I am Indeed Crazy 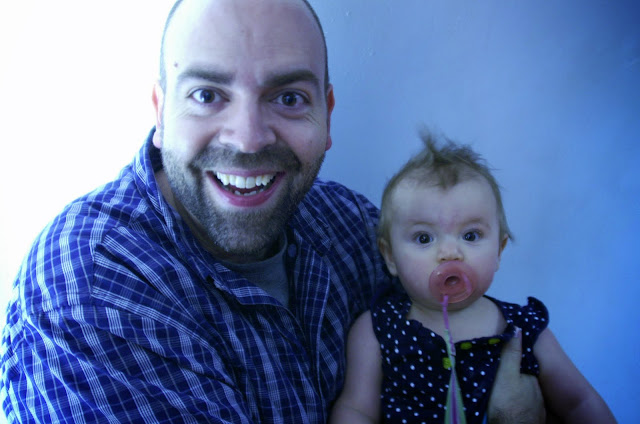 Can you believe this picture was taken one year ago today? It's still my favorite of the two for them.

JAG was off today and decided the way to cure my anxiety was to take advantage of the abnormally beautifully July day in Texas and head to the park.


It was a great day for lunch, swinging and slides. Of course some of us weren't as happy as others. 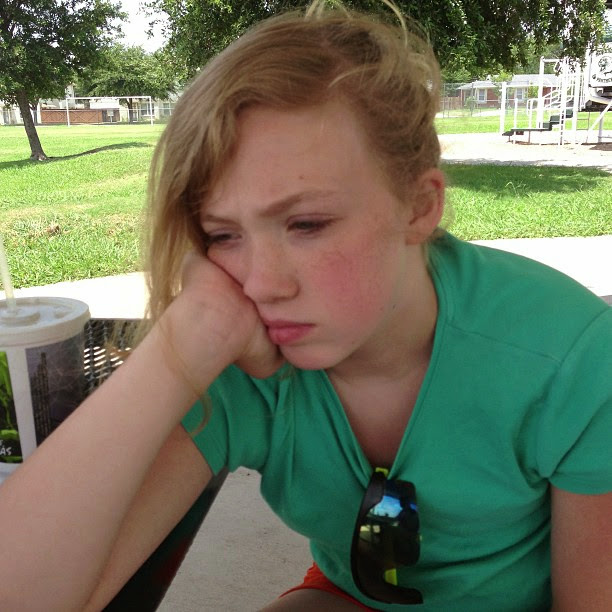 I love this child, but the tweenage moods that come out of her are not that fun. This face was caused because she thought Bekah was "ruining her childhood." She had to wait a few minutes before she went to swing so that Bekah could finish her lunch.

The mood continued to the swings, but changed to "I have to swing over here on the grown up swings all by myself." It's tough being eleven. 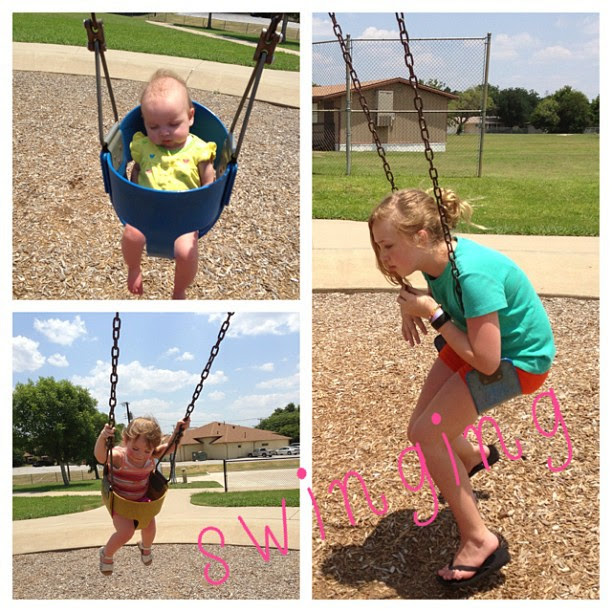 Bekah loves to swing. She wants to go faster and higher while she hangs on and just laughs. She is my no fear child. That statement was proven today when we climbed the large playground to the slides. JAG waited at the bottom of the smaller slide, but would have not part of it what so ever. She stomped her silver sandals up another set of stairs to the largest spiral slide. She went down the first time with Shelby, but quickly mastered all the stairs again to go at it alone. I'm proud to say I stepped back and thought let's see what happens. I only barely heard my Negative Nelly voice saying, we are only a few left turns away from the closest ER. How'd she do?

Well I guess I sounded a bit crazy, but it felt good to let go and hear her scream "weee" as she spiraled down.

Oh man speaking of letting go and trusting, I put Shelby on a plane this evening to South Texas. It was just an hour and half plane ride without any stops, but it about killed me. Shelby and I both knew it was coming, but we kind of didn't bring it up too much. She told me on Sunday that she thought it would be best if I had someone come along with me in-case I got too emotional. She also felt I shouldn't stay to watch the plane take off because I would most definitely cry. How did my girl get so wise? 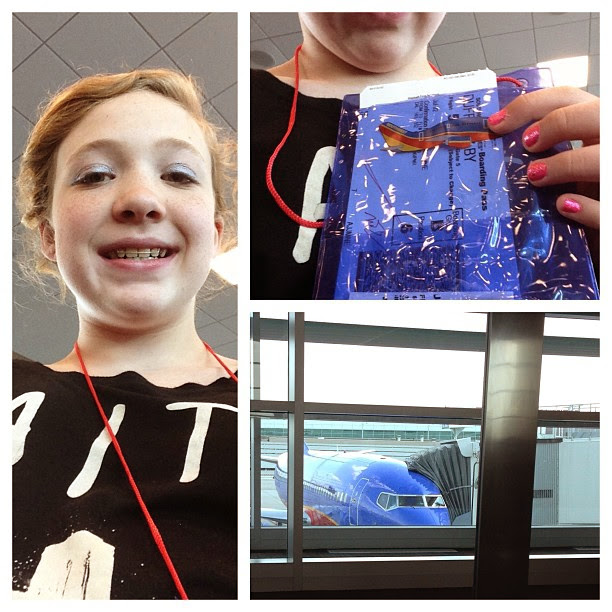 She refused to let me take a picture of her, but I did find this adorable collage on my phone before she took off. She was nervous and just rambled during our drive to the airport. She made sure to tell me not to call her and tell her that I am pregnant again. Ha! Last year she found out I was having another baby (Morgan) while on vacation with my parents. No plans for another anytime soon trust me!

We sang every A Fine Frenzy song that played on Pandora during our drive into Dallas and found a spot in a very crowded parking garage. I took a deep breath and walked her inside where we found a semi rude ticket agent. I just kept giving her a big smile hoping she would read, please don't be mean to us. I'm about to put my life on one of your planes and I am a huge mess right now. I am sorry I don't know my mother's address that I didn't know I had to give you anyway. You have to realize who often those two move and I only send them snail mail on birthdays.

Thankfully, she caught on and the next thing I knew we were in the special only metal detector line at security  (the perks of traveling with an under twelve). We made our way to gate five where a very charming man greeted Shelby and made sure she had everything she needed. Since we were about two hours early (did I tell you I was nervous and I also hate being late) we decided to have dinner. Shelby ate quickly and in between her bites she said "I'm so nervous. I eat faster when I am nervous." I could hear my mother's voice in my head saying, I hope she knows where the barf bags are located.

Sidenote: The terribly rude woman at the whataburger was not catching my crazed mom drift at all. I think that is probably why the receipt you get from the airport fast food places do not have a "call this number to tell us how we are doing" listed anywhere. She needed a good schooling on customer service. And the lovely lady standing next to me on her cellphone who just couldn't wait for them to get her Diet Dr. Pepper so she tried to grab mine off the counter about got the wrath of the crazed mother - thank goodness Shelby was there.

Anyway, back to Shelby. After eating we went down and found a seat by gate 5. She stopped her nervous fidgeting long enough to flip through one of the two teeny-bopper magazines I spent way too much money for at the newsstand. It was nerve raking for the both of us to wait another hour for boarding to begin. I kept say, "you'll be ok," but I think I was directing it more towards myself.

Then the time had come. Paul, the gate agent, called special boarding and as we walked up he said, "hey Shelby are you traveling with us today?" That's we I started the do not cry biting of the inside of my mouth. A trick I picked up during Shelby's first dance recital when she was two. If I bight the inside of my cheek hard enough I won't cry. I also pinch my handing if cheek biting isn't working. He let us say our good-byes and walked her down the the long glass hallway to the plane. I was instructed to stay in the terminal until the plane took off, so sorry Shelby I had to stay. I remember thinking I meant to pray with her. I prayed a bunch to myself, but really wanted to pray with her before she left.

It seemed like forever for them to load the other 58 passengers (they announced it, I didn't count, but could have). I sat by the window I stared at the plane. As was backed out I stood up and watched the pilots get situated and I prayed hard. I prayed that they were having a good day and that they went through all their safety precautions. I have to say I think this where crazy mom kicked in.

They started their decent toward the tarmac and I walked toward the window. The plane slowly went up one side of the runway then turned. I thought oh crap I have to go across the room to see her take off. Be cool Dana, don't make a scene. I found a spot as I heard the engine rev and I prayed some more. My prayers were stronger as the tires left the ground. I stood there about tasting the blood in my mouth and feeling crazier by the minute. This was the moment when I was glad no one was with me because then I would feel safe enough to cry in front of all these strangers. I am also relieved that my thoughts were confined to my head.

Is that smoke? No, no that's normal.
Wait is that a burst of fire? No, that just the sun's reflection.
Ok, Dana, it's just a black speck in the sky you should go.

See? crazy. I walked as fast as I could out of the airport to the parking garage. As soon as I shut the door I let it out - I balled hard. Then plugged in my phone which had died just before Shelby board (hence no little speck plane pictures for you) and called my mother to say, "I am NEVER doing this again."

My crying continued as I drove down the highway out of Dallas, but so did my praying. My thoughts went from trusting is so hard to I can't believe how much I love that child. The child who was driving my nuts earlier today with her mood swings. As a mother I have the fear of what if that is what she remembers of me - the nagging mother. I love my daughter everyday, but it's days like today when that love hurts so bad that make me realize how much I actually do love her. Does that make since?

I wish I could leave on some kind epiphany, but really I think all you can gather from this post is I am indeed crazy. Sorry.
Posted by Dana Rae at 12:02 AM