This obit ran about 10 days after my Meme's birth, it says:

W.G. Wordlaw, 64 years old, one of the pioneer farmers of Miller County, died at his home on Line Ferry road, four miles south of Texarkana, at 9:30 yesterday morning.

While Wordlaw's burial was being discusses, his widow lay at the point of death from pneumonia in an adjoining room. Her physician held out small hope for her recovery.

It goes on to say how the flu developed and how my great-grandfather was one of the "best liked farmers of the community." After that it listed all of his children (he had 21 total...it's a long story). His last child to be born was my Meme, Mary Elizabeth, just ten days before his death.

I've been thinking for days on how to honor my Meme's 90th birthday and this morning this newspaper clipping from my genealogy research came to mind. It shows the struggle that my grandmother was born into and the experiences that molded her into a woman who I owe so much to.

You'll have to bear with with because this day is fully of mixed emotions. As you probably know my Meme is what The Alzheimer's Association calls the 7th stage of Alzheimer's - Very Severe Cognitive Decline also know as end stage Alzheimer's.

I have shared my feelings regarding my grandmothers decline many times:

Love You So Much

I cried many times while sharing my heart with you. Today, I want to discuss what I've learned, How I've dealt and what I want to remember from this journey with one of my favorite women.

Alzheimer's is an awful disease  - not much of a shocker there. I think anyone how has been through this would agree. Of Americans aged 65 and over, 1 in 8 has Alzheimer's, and nearly half people 85 and old have the disease. So, there are many families that have been in our shoes.

There are many things that just plain stink about this disease, but did you know that Alzheimer's is the 6th leading cause of death in the US? Alzheimer's is the only cause of death among the top 10 in America without a way to prevent, cure or even slow its progression. That's the kicker there is nothing you can do as relative, or in my case a granddaughter, to stop this or even slow it down.

I've learned you take things day by day or even month by month. I've learned in my grandmother's case that this disease can come on quickly and then slowly progress. My grandmother diagnosed about 5 or 6 years ago. I remember that she was in her first rehab facility during her birthday and we sent her tulips. I spent her birthday sitting on her bed teaching her how to use her cellphone - she was still my Meme. It's seemed like a matter of months - maybe a year - before we really started to lose her. I remember being so extremely depressed and thinking that I would not see her again - little did I know that she would hold on until her 90th birthday.

As I said above at first I didn't deal well. I was depressed and desperate to help my Meme. As the years have progressed things have roller-coastered. There are days (as you can see from my past writing  where there is hope and things are great then there are days that you think it's time to say goodbye. A few years ago I came to terms with the feeling that the Meme I know if gone and now we pray for her suffering to end and her opportunity to live in peace will come. That may seem harsh to some, but if you knew my grandmother you would understand. Early on while she was still living alone she accidently overdosed on her medication and I spent the night with her. As she went to bed she said to me "this is it, this is the night I will get to see James," my grandfather, her love that she had mourned for over twenty five years at the time. You see my grandmother has been ready for sometime and she has never had a fear of death due to her strong belief in Our Lord.

I know I'm rambling. Dealing is difficult, but eventually you come to terms with the situation. I said early on that I would always visit my Meme and I have, but that has decreased in the past couple of years. I want to say I feel that my pregnancies confuse her since early in the process she still believed I was 18. She did get the opportunity to meet Bekah one day when we thought it was time to say our final goodbyes - seeing Bekah made her smile and made my cry - it still does as a type this. As of today I go as often as I feel I personally need to and always make it a point to assist with my Aunt cannot go. It's hard and it's emotional, but it's my Meme. Ok, I'm not making any sense, let me move on.

What I want to Remember 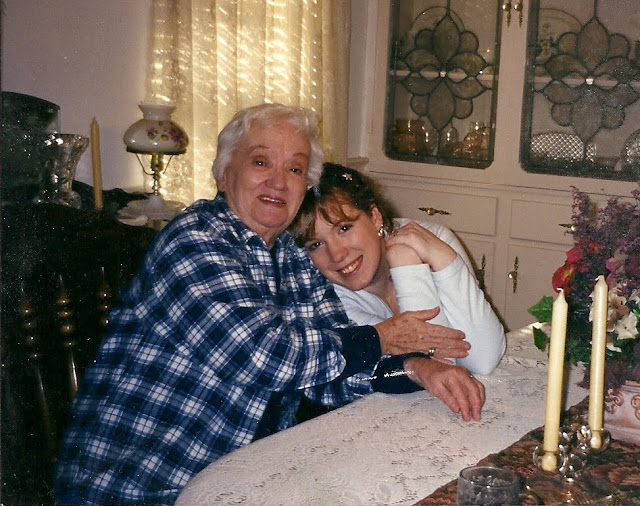 I am now a hot mess of tears and hormones - it's time for my yearly good cry and then pull myself up to go on.

Happy 90th Birthday Meme! I love you with all my heart and you so much.
You've have truly made me who I am today.


Please forgive my typos or misuse of words - I don't plan to proof read this before I post.