Back in the Simple Days


When my sister first saw this picture 30 years after it was taken she said “oh those were the simple days.” At least I think that is what she said meaning that we were young and things were easy.

When I look at it I see the same thing, but not in us, in my Aunt Mary. Things were simple. Now, that being said, things probably were not as simple for her as I believe that they were. She was the last sibling in her family still living, she had lost her husband and never had children. My Aunt Mary lived a long full life and I am sure it was not simple at all, but it’s just the time period.

Let me see if I can make sense of this for you. Earlier today, well actually most of this week so far, I have been fighting this overwhelming feeling that I am meant to stay at home and raise my children instead of working. As you and I know in this economy and with as much as I have on my plate that is not possible at this time, but I am still praying. I caught myself today thinking I just want my children to have a simple life. 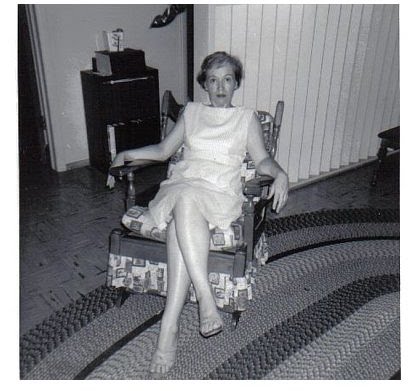 This picture also reminds of the simple days – not that Meme had a simple life either.

To me the simple days took place before internet and before TV. When kids could play  in their front yards without a parent until dusk and not worry. When kids were excited to get a piece a gum and were not asking for an iphone for their birthday. I so wish my daughters could experience that.

At the same time I wish I could run away, back to the simple life. I guess that is what I get for living in a suburb of a big city instead of in the country, but really I don’t think the simple life I am looking for even exists in the country anymore. I am good quality family television and not going broke every time you went to the store .

I want my daughters to enjoy reading and be able to occupy themselves without having to plug in a video game or get on the internet.

This is something I need to instill in them  and I am sure it can be some to some degree in even this modern world we live in. I am really not sure if this rant has made sense, but you at least got to see some good pictures – I love that picture of Meme and I am not really sure why.
Posted by Dana Rae at 8:41 AM

Labels: Being a Mom, Life, My Grandmother