The Main Thing I Can’t Stand About My Body!

There are many things about my body that I dislike, but I am working on them. I am working to healthier and to lose a little weight. In the process I hope to gain some muscle tone I need in some areas. As you know I work to get rid of my grey hair on a monthly basis and I fight with my curls daily.
Unfortunately, the main thing I can’t stand about me body has no easy fix. I will deal with it for the rest of my life and there is no cure.
I have Polycystic Ovary Syndrome (PCOS). If you watched my 33 things about me on my 33rd Birthday Video you know this, but haven’t yet told you what a pain in the rear end it is to deal with.
First just so you know polycystic ovary syndrome (PCOS) is the most common female endocrine disorder, affecting approximately 5%-10% of all females. PCOS is a hormonal disorder that involves multiple organ systems within the body, and is believed to be fundamentally caused by insensitivity to the hormone insulin. For more medial mumbo jumbo about it visit the PCOS Support Website here.
I would say I was diagnosed close to four years ago, but now knowing the symptoms I know I have had it a lot longer. I went in for a yearly examine with the lovely doctor who delivered . Afterward he said “you have polycystic ovarian syndrome here is a prescription see you in six weeks.” As you remember from my account of ’s birth he isn’t really a details man when he needs to be. I actually had to ask the front desk girl to write it down because I had no idea what he told me. I took that piece of paper home and googled it – Big Mistake. I found a link for a support group and on that there were memorials for women who had died from the effects of this disorder. I freaked – you know me always slightly overdramatic. I just knew I was dying.
After consulting with some friends I changed doctors. I found one that sat down and explained that this was not the end of the world and that I probably had it my entire life, but I did need treatment. At the time I went in and saw her both of my ovaries looked like this: 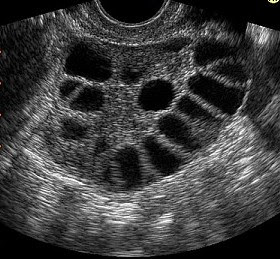 This is not my sonogram – I found this online, but this is almost exactly like what they found. At that time my treatment was birth control.
Lets flash forward about four years to today. I stopped treatment less then a year after being diagnosed. I hated taking pills. I lived with the symptoms. Regularly I would have awful menstrual pain, fatigue, weight gain, loss of hair, and anemia. A few weeks ago after I had had enough of my mother’s nagging I went back to the doctor. Actually I went back to my original doctor – who delivered – I know I know, but just wait.
I had another sonogram. This time I had just one cyst in my right ovary – good thing, but my hormones are still out of whack. So, I am back on treatment. This time I am on the insulin sensitizer drug Metformin and the Anti-Androgens drug Spironolactone. My doctor and I decided on this route because JAG and I do want to have children.
This time around, my now awesome with older age, doctor sat down with me. We discussed every detail – he really wants me to get knocked up – don’t most OBGYNs? We have a plan for treatment, but the treatment is now irritating me – I know…I am never happy right? Well, I am not a fan of pills, but I have to say I am doing very well this time. My main gripes are the pills make you sick if you don’t eat correctly when you take them, meaning having a big greasy hamburger with your pill makes your stomach go crazy. Then one of them, I am not sure which, has made me a crying fool.
I thought my hormones were out of whack before, last night I had a mini meltdown crying episode because the neighbor stopped by to tell me that Duke barked too loud for their liking and they would appreciate if we did not leave him outside for long periods of time. She was nice about it, but as soon as I shut the door I was in tears. Don’t ask me – I hardly know why I cry anymore. Being as how we have just starting our second week of marriage I am sure JAG probably is asking himself why he married a crazy woman like me.
So there you go – I have just one (Thank goodness) medical issue. It’s nothing major, but it is a major pain!
I have found when I tell people about PCOS they have it or they know someone who has it. What about you? Do you or do you know someone with PCOS? Is it this bad for them or am I being over dramatic – it’s ok – you can tell me. 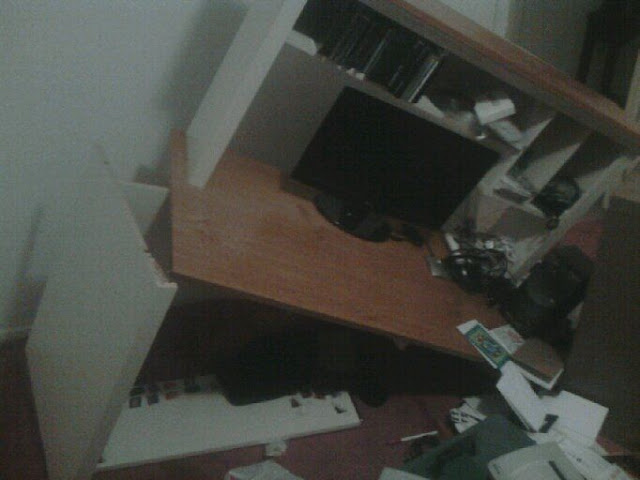 Well if you can't tell by the picture - this used to be a desk. A desk that I loved...a desk I broke the other night. Let's just say I had a full hormonal breakdown and then five minutes later was cracking up out it. I just wanted to move it an inch or two - ooops.
Posted by Dana Rae at 5:39 AM